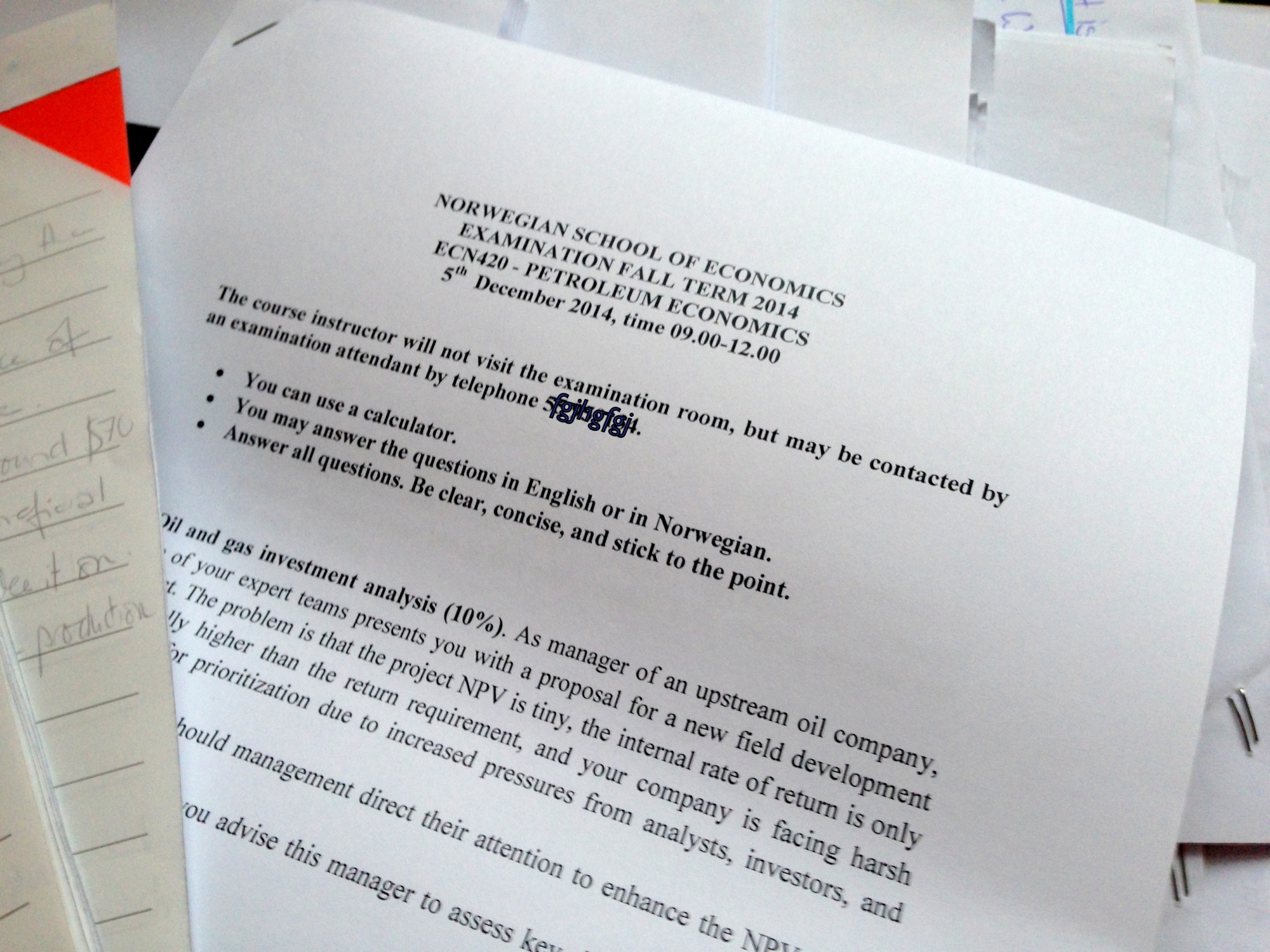 Man! I can’t believe I’m done with my first semester in Norway! Time has literary flown by since August, and tomorrow I’m off to my month of reunions. CANNOT wait, but first here’s the promised post about how taking a final in Norway (specifically NHH) makes you feel like you’re part of something huge and scary? Everything is way too intense.

So, a month ago, I saw this video about taking finals at NHH, and I thought it was funny but didn’t take it too seriously. I mean let’s be real, it can’t be this crazy, but I was wrong. It actually kinda is.

Below a few observations:

1) You don’t take the exams in your normal classrooms:

They have these big halls specifically set up with individual tables for students to take their exams. And if a class was bigger than let’s say 90 students and the hall doesn’t fit, then some of the students might be sitting in another room. Even the basketball of the gym is sometimes turned into an exam hall. How crazy is that?

So given that the professor never shows up, you have these older people who volunteer (I assume) to be examiners. And there’s so many of them. In the big halls there’s at least 6 of them. This morning I was in  one of the small classrooms and we were 10 students and there were 3 of them. Some exam rooms even have someone sitting infront of the the door guarding it: for the last week the same lady was sitting in the exact same spot everyday knitting. Seriously makes you wonder what they think you’re capable of doing. At some point today, I looked up at the ‘examiners’ and saw that one was heading out for his lunch break, one had her eyes closed, and the other one was eating his mandarins. Too cute. haha

3) Trips to the bathroom

And just like a little kid: if you need to go to the WC, you’ll be escorted there by one of the “examiners”. Supposedly that way you won’t be able to cheat. And then they wait infront of the bathroom door and make sure you don’t talk to anyone during that exciting trip.

Most exams last 3-4 hours and you’re supposed to write everything. Some professors allow you to bring your laptops in and type everything instead, but I still didn’t experience that type of exam myself. Anyways, for the handwritten exam there’s special paper that you use: I don’t know what it’s called in English, but it’s basically the kind that will copy everything you write on the first page on 2 other pages as well. (Anyone know what I’m talking about?)  And the point of using that paper is that you’ll end up with three copies of your answers. The first two copies will be handed in, and the last copy is for you to keep in case you want to remember your gorgeous words. See picture below and do not make fun of me. It was towards the end of the exam, and I literally couldn’t think of anything else about fish to say.

As you’ve prolly guessed from the last paragraph, the whole point of handing in two copies of your exam is that two different people take a look at it, and then somehow agree on the final grade. And apparently after all this, if you’re not too happy with your grade, you can request a re-grading of your exam. I don’t think I’ve ever had that option in any of the schools that I’ve been to or it was just not that promoted. And I forgot to mention earlier, but your name is nowhere on your exam. When you sign in, you are given a candidate number which is basically a 6 digit number that is only used for these exams. So when the graders look at your exam, they technically have no idea whose exam they’re looking at.

You know how it is, but nothing is a safe bet. So when you ask for your exam to be regraded, you’re basically saying no to the old grade and agreeing to whatever that new grade is. And the latest rumor I’ve heard is that a friend of a friend had a D, asked for regrarding and ended up with an E. Ouch much?

Overall, I feel like this whole system here is more like nuclear science. There’s too many rules to follow, too many details that one can miss. And it honestly makes me wonder whether it is for the best or not. At the end of the day whoever wants to cheat will find a way to do so. For the rest of us we look at this long process and stress out trying to understand it, or just have a few good chuckles, go home and write a blog post about it…