So it’s already been a little over than 2 weeks since I’ve settled in Oslo, and I’m slowly but surely getting the hang of it.

I’ve met up with a few old friends, made some new ones, been to Ikea, unpacked all my stuff, had a friend from out of town visit, been to a concert (Tix to see the Red Hot Chili Peppers were the awesomest birthday gift thanks to Natalia!), been to a Norwegian Trivia night (my team sucked, but we had a blast!), found my ‘ethnic’ grocery store (more on that in another post!) and signed up for Norwegian language class starting end of the month! I would say, life has been pretty good! 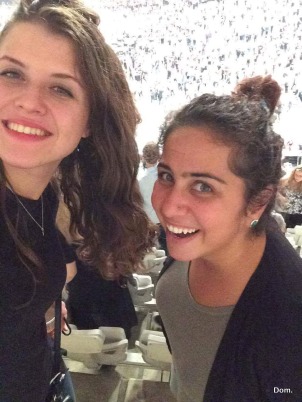 Aside from that I have been trying to get back into running, which honestly hasn’t been as easy as I’d hoped for. I’m slowly trying to build up my mileage again after a summer of laziness and it is really hard when I don’t have a running support group in town, but you never know right?

Actually one of my favorite moments since I’ve been in Oslo occurred a week or so ago when I attempted to go on my 2nd run in the city. Oslo is mostly flat but there are a few hills here and there, and, lucky me, I live close to one of them. The hill is by no means crazy, it’s just a couple blocks, easily run in less 2 minutes (?), but when you have barely worn your running shoes all summer it can definitely feel like Mount Everest, especially when surrounded by Norwegians who are usually 190% fitter, faster, taller and prettier than you hahah.

Anyways, so here I am on a Saturday morning attempting to crawl up this hill and at that time of the day, it was just me, this guy, and this older lady on the streets. The guy was just taking a stroll and I’m crawling on one side of the road while the other Norwegian lady who I had seen a couple mins before running fast is running up the hill on the other side of the road.

After what seemed like an eternity, I completed my crawl up the hill and decided to walk a few steps to catch my breath, when suddenly I see the woman cross the street and with a smile mumble a few words in Norwegian to me. First thoughts in my head: “What’s going on? Why is a Norwegian stranger smiling at me? And even weirder, why is she TALKING to me?” I guess my face showed some confusion, so the lady asked: “Do you speak Norwegian?”, I answered: “No” with a smile, and she immediately with a smile switched to English “Don’t stop! You motivated me to run up this hill!” she said before asking me about my age, telling me that she was 54 (she looked fitter than me), talking about knee support and giving me recommendations about some type of heel caps? I kept nodding and smiling, still blown away by the fact that a Norwegian stranger was the one starting a conversation with me on the street. By then I had started jogging again and was about to turn left before she headed the other way. We said our goodbyes and parted.

Since then, every time I hear a comment about Norwegians being unfriendly to strangers, I smile and remember that lady. I remember her every time I’m attempting my hill crawl and every time I make it to the top. I am not sure I’ll ever run into her again, but who knows. Since then I’ve also come to the realization that sometimes on your runs if you smile at runners coming your way there’s a slight chance they’ll smile back (Yes, even if they’re Norwegians!), so here I am two weeks later still testing this theory. I’ll keep you updated!

Until the next time!