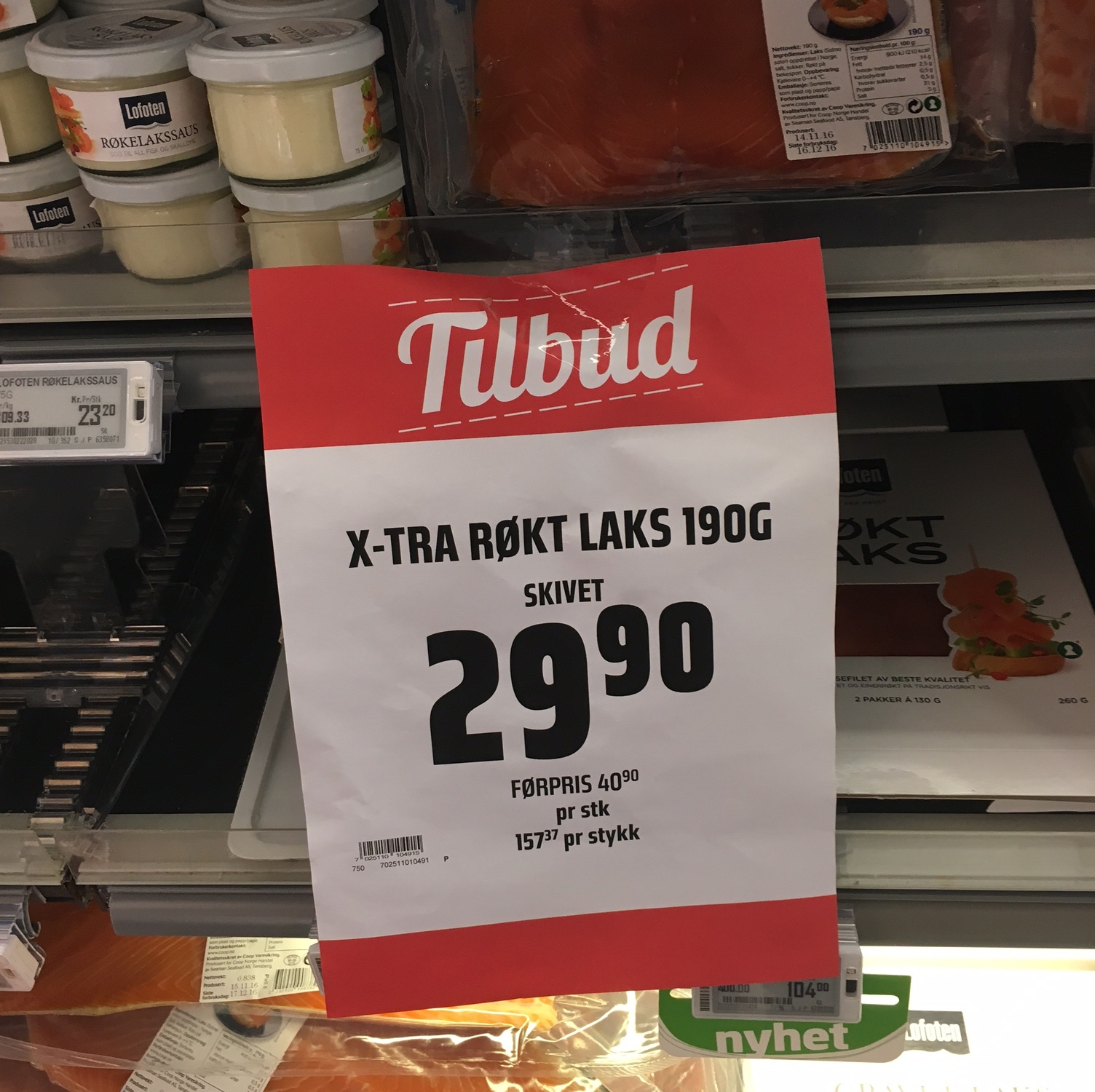 it’s been a couple weeks since my last post, and I do have some stories to share, but today, I decided to focus on just one that happened to me this past Saturday.

After I grabbed lunch and went to see ‘Inferno’ with a couple friends, I decided to walk home from the movie theater. It was sometime around 7.30pm and I realized I could stop by the store on the way to buy some milk and anything else I might need given that everything is closed on Sunday.

By the time I made it to the store, it was close to 7.55pm, and I realized that it closes at 8. However, the doors were still open and so off I went to get the things I need. As I strolled through the aisles, I saw a bunch of things on sale, so I grabbed everything even though I didn’t necessarily need anyting. By the end, I made my way to the cashier with a little salad, some smoked salmon, a chocolate bar and some milk.

When the cashier asked me whether I wanted my kvitteringen (i.e. receipt) or not, I answered yes, and although I usually don’t give it a second look, this time I did and I noticed that I was charged 40NOK for the salmon instead of 29,something which I thought I had seen on the poster. “11 NOK is a little over 1 Euro. Should I just forget about it?” I asked myself, and I was about to step out of the store when I decided to turn around and just go check this poster on my own in order not to embarrass myself.

However, by that time the little gate had been shut down and one of the other cashiers noticed me and mumbled something in Norwegian about me not being able to go back in. So I had to walk to her and explain to her my situation.

Me: “Hi, I just bought some stuff and I think the smoked salmon is supposed to be on sale but it’s not.”

Me: “No, the smoked salmon”

Her: “Oh, the laks.” and then she turns to the other cashier who had helped me before and asks: “Is the smoked salmon on sale?”

By that time you can imagine how I must have felt. Everyone in the store was standing by the checkout lines and they were all listening to this conversation, but there was nothing I could do. I mean I really really saw that sign and I just went back out of principle.

Anyways, back to the story. So, the guy sitting at the other cashier responds:

“No, it’s not.” and then while making eye contact with me says: “The salmon is NEVER on sale”.

By this point I just wanted to prove them wrong, not necessarily because I cared about the Euro but because of the way they’ve been handling this situation, so I said:

“Well, I saw the sign, I want to go back and check it.” and without waiting for their okay, I walked through the line of people and headed to the back of the store.

Thinking about this now, I realize that had I been in the States, this situation would have taken place in a different way entirely, but I guess that’s how it is in good old Norge.

So, I go back to the store, find the little sign, double check it for around 100 times and make sure I am correct, take a picture of it and walk back to the front. I skip the line, and go back to the dude sitting at the cashier. Without saying a word, I pull out my phone and show him the picture. He goes: “Oh yes, it’s on sale.” No apologies, nothing. He scans the item and a couple seconds later, the machine drops 10NOK and 10 cents into the little opening. I take them and leave.

Walking out of the store, I realized that even though I’ve lived in this country for a year before, and now again for a few months, I still don’t get some of the little things that happen in every day life. In this scenario, I would have definitely apologized if I were the one working the cashier. I mean I would have done a lot of things differently, but apologizing would have been the top of that list.

Last week the other trainees and I had some cultural awareness training. Mostly stuff I’ve learned over the years about how different cultures can be, but one of the things the speaker mentioned is that noone does anything to be rude. Most everyone has a good intention behind them behaving in a certain way. So, as I was walking back home, I thought of what this guy might have been thinking and tried to give him the benefit of the doubt:  Yes, maybe he wanted to be pracitcal, to solve the situation quickly when he said the salmon wasn’t on sale, and maybe he truly believed that it never was. But still, I still can’t find an explanation for why he couldn’t say a little Sorry towards the end and not make me feel like a loser who doesn’t know how to read a sale sign.

Until the next time!